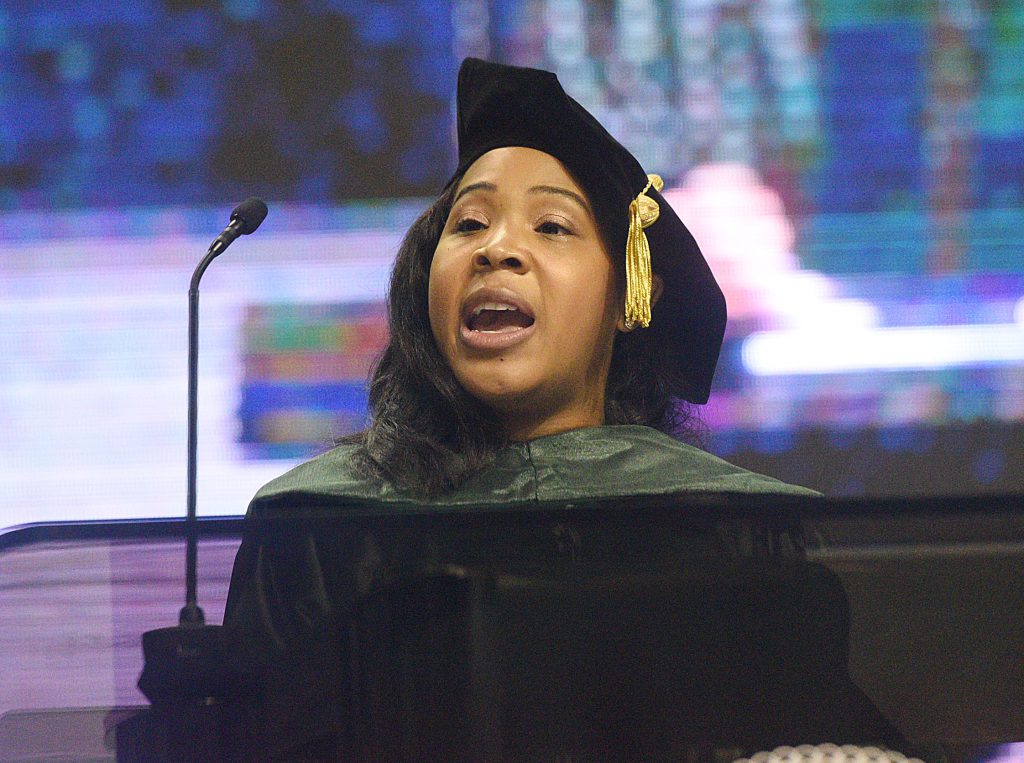 Keynote speaker Dr. Rachel Francis opened her Grambling State University Fall 2021 Commencement speech by asking the new graduates to stop to soak in the moment and enjoy every bit of the day.

And like Francis, Pharmacist-In-Charge at the Teche Action Clinic Pharmacy in Youngsville, Louisiana, ended the speech Friday morning in the Fredrick C. Hobdy Assembly Center, she told them it is now time to tell their story.

A big component of Francis’ speech was her own story.

“Imagine, just for a second, the year of 2009,” Francis said. “It was three days before graduation on a night we were holding graduation practice. Everyone was smiling, having fun ‘clowning’ if you will, and taking pictures trying to soak in the last good times we would have with our friends and fellow classmates.”

“Picture me smiling and having a grand time smiling and waiting for instructions on how the proceedings would follow. Everyone was talking about the future. Yes, the F-word. The future seemed so far away, but in reality, it was right there. Some of my classmates were going to immediately start working in their field. Some were going back to school to pursue a graduate degree. Some wanted to take a year off. But for me? I had no clue as to what I was going to do.”
Francis said it had been her life’s dream to be a pharmacist. But three days before graduation she had not heard from any of the 10 schools she had applied to.

“Luckily for me, I didn’t throw in the towel,” Francis said. “I didn’t have a pity party for myself. I told myself a dream is still a dream, even if it is deferred. I thought maybe I would go to school again, maybe for nursing. Or maybe work on a master’s in chemistry until I could get into pharmacy school. I was frantic applying to so many places in such a short period of time, letting my fingers do the talking on the applications. And the question was still, ‘What’s next?’”

Francis’ last trip to her campus mailbox as an undergraduate was when that question was answered for her.

“In the mailbox was my conditional acceptance to pharmacy school at Florida A&M University,” Francis said. “I was excited — elated — all of those adjectives you can think of. I totally disregarded the conditionally accepted part and celebrated with my friends and of course called my parents to tell them that I had finally been admitted to somewhere.”

“Once the excitement passed, I reread the letter and realized I still had to take four courses before I would be fully accepted into the program. I’m not ashamed to say my ego was bruised. My feelings were crushed. I was so excited to finally have a summer completely off and all of my plans were ruined.”

Francis said she went to FAMU for an acceptance interview before returning to Grambling to take those four courses she needed to in order to begin classes in Florida in the fall. She said some people in those classes didn’t believe she had already graduated, with some saying things she found hurtful.

“No one needed an explanation,” Francis said. “I had a goal to reach. I don’t want any of you to feel that your timeline is anyone else’s or that you have to explain yourself to make others feel good.

“Oftentimes people see and know the end results but don’t know what it took to make you the person you are today. I am a living, breathing witness and testimony for you all. Please continue on your path and journey. There may be setbacks. There may be alternate routes. But do not give up on your dream.”

Francis then talked about a setback she had at Florida A&M.

“I got sick and had to miss a week of class,” Francis said. “In pharmacy school, that’s career and school suicide because everything is so fast-paced. I was so sick, I had misread my excuse and later realized I had only been excused to miss one day of class instead of one week.”

“But I still decided to push on and attend class. I was so weak and feeble. But my classmates rallied around me and helped me through it so I would not be behind. I could have quit — packed up and gone home. I could have taken that brief sickness as a sign I was in the wrong place. But I didn’t.”

Francis said she didn’t realize it at the time, but it was a defining moment in her life.

“The word perseverance comes to mind,” she told the graduates. “Just as you stayed the course to complete your studies at Grambling State University, whatever is your ‘what next,’ persevere and finish what you start.”

“It may not be easy. It may take you a year or two later than planned. But nothing ever worth having comes easily. You will appreciate your struggle that much more because it makes you who you are. It motivates you to push on. It will become part of your story.”

Francis concluded by asking the graduates how they want to be remembered.

“How do you want to impact the world after graduation,” she asked. “Do you want to be known for your career? Your accolades? Your spirituality? No matter what it is, please allow your story to be told in the way it should be. To use a verse from one of my favorite songs from the Broadway play ‘Hamilton,’ — ‘Let me tell you what I wish I’d known when I was young and dreamed of glory. You have no control. Who lives, who dies, who tells your story?’