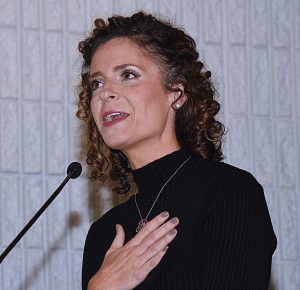 Opening her speech, Letlow seemed to be directly addressing veterans looking on as part of the audience.

“As our country celebrates this Veterans Day we are filled with gratitude and we pause to recognize and reflect and remember the service and sacrifice of so many of our countless American heroes,” Letlow said as she opened her speech. “It’s because of your bravery that we are able to enjoy our fundamental liberties as Americans. Our veterans are the ones who fought the forces of tyranny and oppression and always kept the fires of freedom burning.

“Every day, when I walk through the halls of the Capitol in Washington D.C., I’m reminded that I only have that opportunity and that privilege to serve because you served. The American Dream and ideas of liberty and the pursuit of happiness endure because of you — our veterans. Those brave women and men who protected our country from those who wanted to take those freedoms away.” 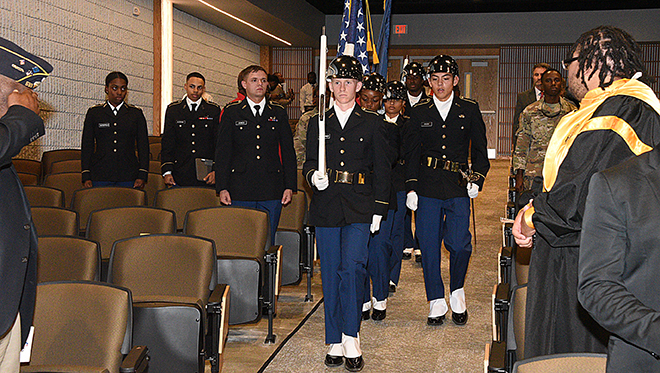 “As anyone who knows our history will tell you, it’s communities such as Grambling, Ruston, Simsboro and Calhoun that produce selfless soldiers that won the battles in far-away places like Nonmany, Okinawa, Korea, Vietnam and Iraq.”

“After World War II ended, Dwight D. Eisenhower was asked why our troops had won that war. He said guns and tanks and planes are nothing unless there’s solid spirit, a solid heart and a great productiveness behind it. We know that so many soldiers, as veterans, came homeland used that same spirit, heart and productivity to serve our communities long after they took off their uniforms.”

Letlow said veterans have found countless ways to give back to their communities.

She then talked about her late husband Luke Letlow’s deceased grandfather Richard.

“As we liked to call him, ‘Papa Dick’ served in World World War II,” Letlow said. “He was the one who instilled a strong sense of patriotism and love of country in my late husband Luke, helping set him on his path of public service.”

“I’m so grateful for ‘Papa Dick’ for teaching many of the treasured values that made him into the wonderful man I married, the amazing father to our children, and the dedicated public servant who worked every day to make this region better.”

Letlow continued by saying she knows veterans have not only impacted her life but the life of every American. 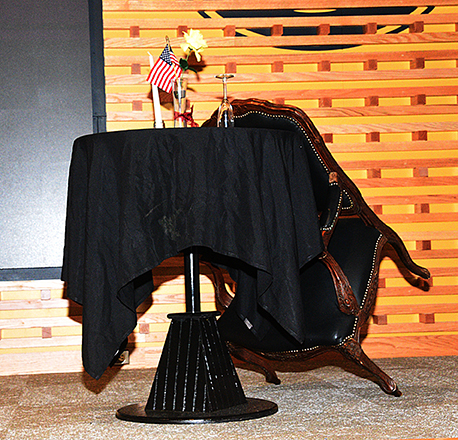 “I know every American has a similar story, thanks to all of you in this very room,” Letlow said. “You are the leaders. You are the ones who not only protected the precious gifts of freedom and liberty for my generation, and my children’s generation, but you also came home and built the communities we call home today.”

“We can never thank you enough for all that you’ve given to our country, to our state and to our nation. That is why we fight to improve the health care and benefits that you receive. That’s why we have ceremonies like these and that’s why we have monuments to our soldiers in our nation’s capital. There is no tribute great enough to do justice for all that you have done for us”

Starting to wind down her speech, she mentioned what is called America’s “greatest generation” – those who returned from or fought in World War II.

“Now, that torch has been passed to my generation, and we must ensure that the flame of freedom is never extinguished. It’s up to us to preserve it, to protect it, and to cherish it. … It is my hope that decades from now, we answered the call to serve just as many of you have, and made the nation you fought to protect a much better place.”

The GSU Choir performed “America the Beautiful” and “Striving After God” as part of the program that also included recognition of veterans and a moment of silence for fallen service members as well as a Tribute to Our Fallen Soldiers/POW table by GSU’s ROTC Tiger Battalion and a flag-folding ceremony by Paradise Funeral Home of Arcadia.