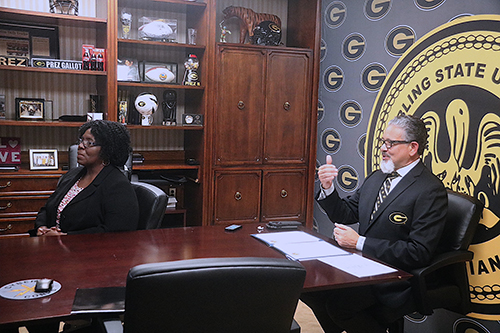 Grambling, La. – November 15, 2022 – Grambling State University (GSU) has signed a student exchange agreement with Management College of National Defense University (MCNDU), a military academy located in Bade District, Taoyuan City, Taiwan, Republic of China, to establish an ROTC Student Exchange Program.
The agreement is to have each institution send one or two student(s) to either institution annually for one to two semester(s) of study each year.
MCNDU is a management college with programs in business, law and logistics. The primary targets for GSU are freshman and sophomore ROTC students although the program will be open to all students.
The agreement was signed during a video conference that included GSU President Rick Gallot and Provost and Vice President for Academic Affairs Connie Walton with officials from MCNDU, conversing with the assistance of an interpreter.
“GSU is well-known for its excellent reputation in ROTC training,” MCNDU Commandant Chen-Yu Lin said via the interpreter. “We also know GSU consists of the College of Art[s and Sciences], College of Education, College of Business and College of Professional Studies. We share the same goals and hope to build a close relationship with MCNDU.”
Gallot expressed his appreciation for the partnership to the MCNDU officials looking on and listening via the online connection.
“The opportunity for students from Grambling State University to study in Taiwan as well as students in Taiwan to study here in Louisiana is an amazing opportunity,” Gallot said. “We look forward to a very prosperous partnership, and I look forward to coming and visiting personally at some point in the very near future and would welcome the opportunity for them to visit us here.”
After the signing ceremony was completed, Gallot admitted that this agreement between schools was unlike the many others he has previously signed.
“We’ve signed many of these agreements, but never quite like this,” Gallot said. “We even signed some virtual ones during the pandemic, but this one is certainly on a whole new scale.”
“For Grambling students to have the opportunity to participate in this kind of program and study in Taiwan and to have their students come and study here is something we are and should be looking for in expanding opportunities for our students. We’re such a global society now — we’re all more connected than apart, so I think this is a tremendous opportunity for our students to get this exposure to travel and study abroad.”
GSU’s agreement with MCNDU calls for no exchange of money between institutions and will be based on the following details:
The agreement will be reviewed by both universities to determine the effectiveness of the program once every three years for the purpose of revision and renewal.
VK
Facebook
Twitter
Google+
Post Views: 918