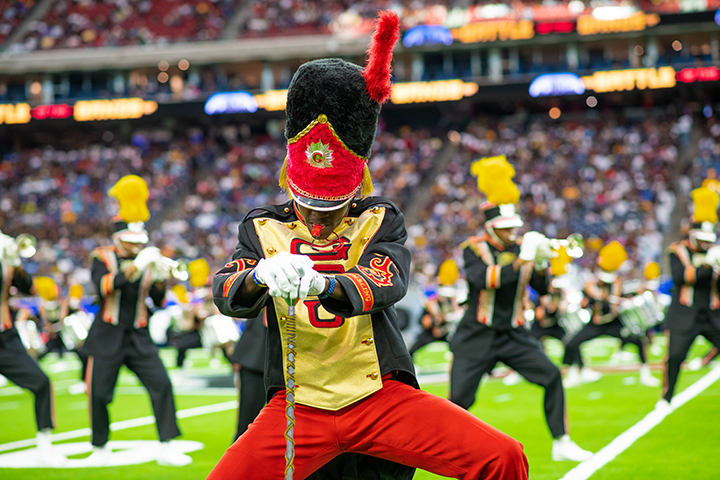 Houston, TX – August 29, 2022 – The Grambling State University World Famed Tiger Marching Band got an early start to the fall marching band season as one of eight bands from Historically Black Colleges and Universities (HBCUs) to compete in the 2022 Pepsi National Battle of the Bands event that was held Saturday at NRG Stadium in Houston.

“I think the kids did well even if they say I’m never satisfied,” said Dr. Nikole Roebuck, Director of Bands and Chair of the Department of Music. “And I’m not, so I’ll continue to push and get them to keep making progress week after week. I don’t want them to get complacent, so we’ll continue to work hard so that we keep on elevating our performances throughout the season.”

“I think the fact that it was our first performance of the year and our first performance in the National Battle of Bands made it even more special than many performances,” Roebuck said. “This was the first time we’ve gone up against seven additional HBCU bands, so it was very exciting. There was a lot of energy in the stadium and the kids fell in line and did what they were supposed to do.” 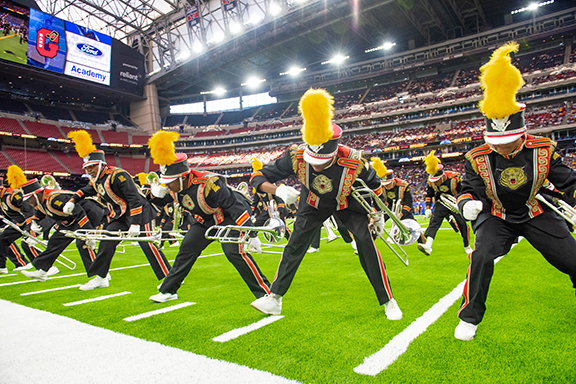 “I think that kind of event is good for all bands in general. That’s your opponent across the field, so you’re doing everything you can to make sure you come out on top, every week. This was a great way to start marching band season,” Roebuck said. “Every time the World Famed Tiger Marching Band performs, it’s special. We try to make each performance one people will remember and talk about forever. So, we’re going to go out there and show people what ‘The World Famed’ is all about.”

GRAMMY-nominated rap group Migos headlined the event with a performance following the final band performance of the show. Migos is a multi-platinum hip-hop group founded in Atlanta as a trio featuring Quavo, Offset and Takeoff. The iconic hip hop trio amassed more than 3.3 billion streams of their hit songs on Spotify, including “Stir Fry,” “Walk It Talk It” and “Bad and Boujee.”

The event also included a conference for entrepreneurs. National and local bank leaders showed up in Houston’s 5th Ward community to conduct a workshop with established and aspiring business owners. Food distribution to the homeless community also took place on Saturday morning.