The STEM-based pitch competition, developed by Nexus Louisiana, gives students the opportunity to present a technology-based business plan and receive mentorship from industry leaders and win funding for their idea.

Members of GSU’s second-place Vizio-Air team were Shay-Ann Audain (team lead), Caesar Catin Jr., and Sonelle Casimir, who were assisted by Sreekumari and mentor Bukky Awoyemi from the BASF corporation.

Vizio-Air is a miniature device designed and created by the GSU team of students that detects a wide array of air pollutants and shares the results with users in real-time via a mobile device.
The device makes it easy for users to determine surrounding air quality, alerting them of harmful, illness-causing pollutants and ways to eliminate such potential dangers.

“This is the result of their hard work and I am very proud of my students,” Sreekumari said.

Audain said he felt confident about his team’s performance before the results were announced. 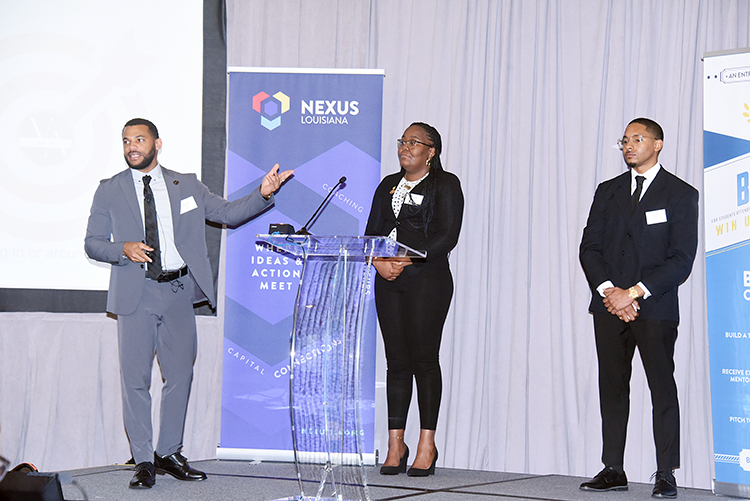 “We were excited to participate in this year’s BizTech challenge and took advantage of the networking opportunity to meet and connect with other professionals and fellow competitors likewise,” Audain said. “I think that we did an excellent job with the presentations, in my opinion.

Audain said the diversity of the Vizio-Air team played a role in their success.

“We started planning for this competition early on and given that we came from diverse academic backgrounds (mathematics and physics, accounting and engineering), we were able to divide the tasks between ourselves very easily,” Audain said. “In preparation for the BizTech Challenge, we put in a lot of time and effort to make this concept a reality. Many late hours were spent putting the finishing touches on the presentation, ensuring that all the deadlines were met, and also having productive meetings with our faculty coach, Dr. Prasanthi Sreekumari, and mentor Bukky Awoyemi, while also trying to keep up with regular coursework.”

GSU President Rick Gallot gave a quick introduction before the competition and talked about what the BizTech Challenge has meant to Grambling State University.

“We’re extremely proud to see the ingenuity and hard work pay off,” Gallot said. “Their successes in these competitions prove that innovation begins the day our students step foot on campus. Their bright ideas from the classroom become more than thoughts, growing into viable business concepts that can change the world.”

Under the guidance of Sreekumari and mentor Christiana Davis, a small business development consultant at the University of Louisiana-Monroe, GSU’s Nutreni team was headed by Jahres Peter along with teammate Dennis Telemacque and pitched an e-commerce website designed to connect consumers that desire access to organic, fresh plant-based products with local small-scale farmers selling such produce.