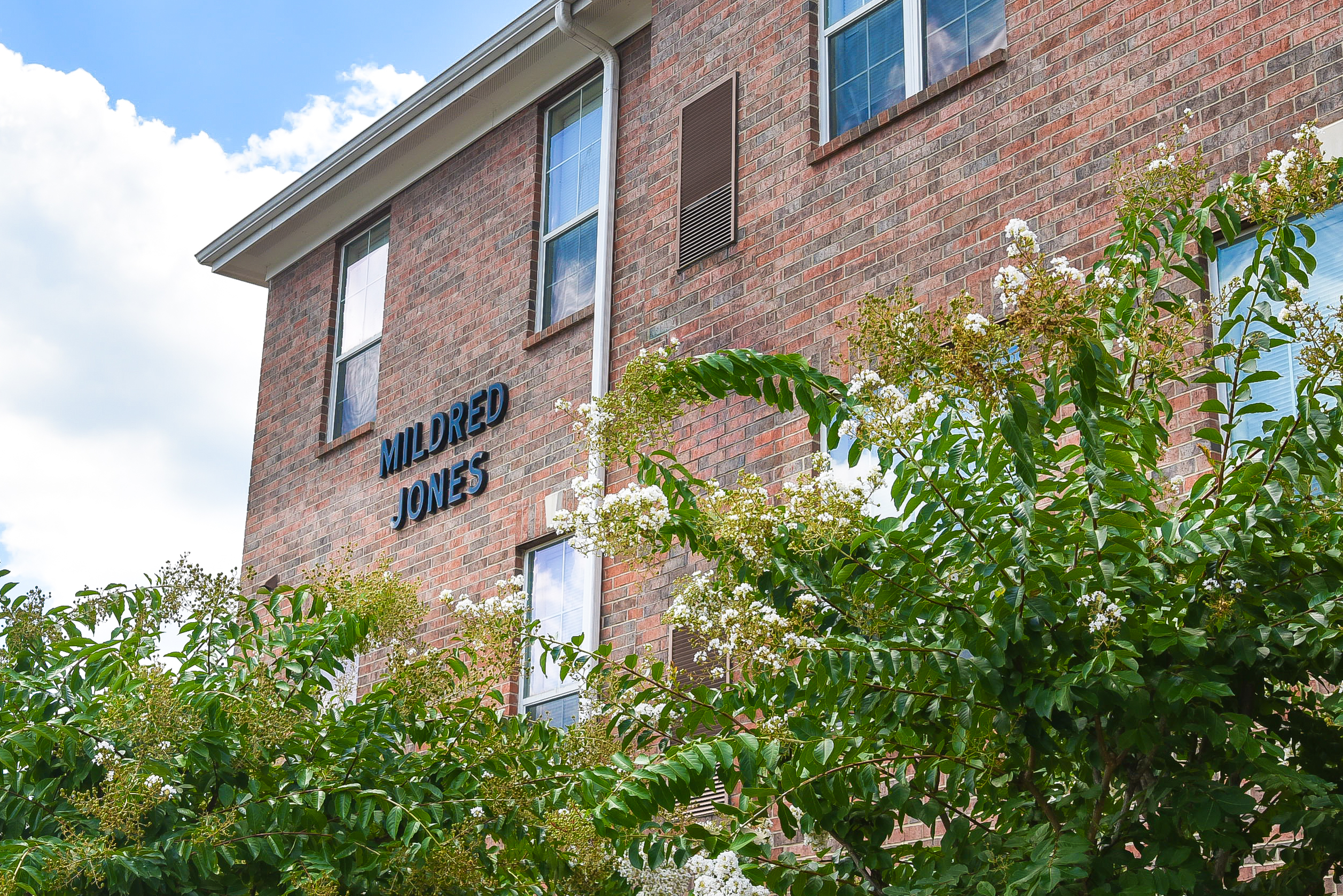 GRAMBLING STATE UNIVERSITY IN NAMING OF THE RESIDENTIAL HALLS

Martha Adams was the wife of the founder of Grambling State University, Charles Phillip Adams.

Crispus Attucks, a slave, was the first American to die in the American Revolution during a Boston protest on March 5, 1770.

During her time as President and President Emeritus of Bethune-Cookman College, she became the advisor to President Franklin Delano Roosevelt on minority affairs, assistant to the Secretary of War for the selection of the First Officer's Candidate School for WAACS, a member of the Women's Advisory Committee on War Interest and President of several other civic groups. She was awarded the Springarn Medal and the Francis Drexel Award for distinguished services to the Negro Race, the first Annual Youth's City Award, and the Haitian Medal of Honor from the Haitian Government being the first woman to receive this honor. At the time of death, she was still contributing articles to numerous magazines and journals.

Dr. J. D. E. Bowen was born to free Negro parents in New Orleans, Louisiana. His mother was the daughter of an African prince. They made sure that he was well educated. He was the first black man in the Methodist Church to receive a PhD. Dr. Bowen was active in charity work and race relationships.

Frederick Douglass was a renowned abolitionist.

Charles Richard Drew (1904-1950) a Negro surgeon, became known for research on blood preservation and for the organization of blood banks. He directed the blood plasma project for Great Britain in 1940 and then the American Red Cross blood plasma in New York City. He received the Springarn Medal in 1944 for his work.

William L. Garner, the youngest of three sons of Daniel and Dora Tribble Garner, was born in what is now known as the Mt. Olive Community, one mile north of Grambling, Louisiana.

His education and work were fundamental in the developing of Grambling as a renowned university. He was one of the first four students to enroll in the Allen Green Industrial Institute, one mile west of the present side of Grambling State University. His high school work was completed at Coleman College, Gibsland, Louisiana, and earned his B.S. degree at Wiley College, Marshall, Texas with further studies at Hampton and Tuskegee Institutes.

Believing that man's happiness does not lie in freedom but acceptance of duty, Bill, as he was fondly called, believed in teaching the sons and daughters of Grambling "how to live" as well as "how to prepare to make a living." During his 37 years at Grambling State University, he served as teacher of mathematics, science and social science, basketball coach and was the first registrar of Grambling State University, a position which he held for 27 years.

William Garner retired from active work in 1964. In 1980, he was honored by being named Registrar-Emeritus.

Simmie Louis Holland (1882-1953) was one of the first graduates of this institution and a native of Lincoln Parish who started with the school in its early years. He showed leadership by organizing work groups among the students to clear off the grounds, erect buildings and work on the farm. After graduation, he taught for several years in the public school system of Lincoln Parish. He gave up his school work in the late twenties to devote full time to ministry. He exemplified in every way the character, service and leadership desired in everyone associated with him. This won for him many friends on the local, state and national level.

Throughout his public career, Simmie Holland maintained unusually close contact with and loyalty to Grambling College. He often served as spiritual advisor and counselor to the student body and staff. Such leadership helped pave the way for the school's achievement.

Virginia Lewis Harris Hunter devoted her life in service to all mankind. She was a native of Union Parish, born in Downsville, Louisiana, the third child of Reverend L.L. and Amelia Lewis. Virginia Hunter received her elementary education in the Downsville Public Schools. She completed high school at Grambling and received her Bachelor of Science degree at Grambling State University. At the University of Southern California, where she received her Master's degree, she was invited to membership in Pi Lamba Theta, a national honor society for women in education. A deep and abiding love for quality education guided her to do further study at Tuskegee Institute and the University of Michigan.

Virginia Hunter was one of Louisiana's best known and best loved teachers and administrators. Her teaching career began in the elementary schools of Lincoln Parish. The years that she spent shaping the lives of young children left a mark of distinction for her in the parishes of Winn, West Carroll and Jefferson Davis, but it was Morehouse Parish at the McGinty School where her teaching and community leadership skills gained state and national attention. Because her work was so well-known, she was invited to Negro Norman and Industrial Institute as Supervising Teacher in the Laboratory School. She continued to receive citations for excellence as a leader in the classroom and her home community.

She served as Supervising Teacher until 1951 when she joined the Administrative staff at Grambling State University as Dean of Women. She worked at her alma mater a total of 24 years and left a brilliant record of performance when she retired in 1968.

Anna T. Jeanes, founder of the Jeanes Fund was a resident of Philadelphia, Pennsylvania. In 1907, the Jeanes Fund came into existence to provide supervision for the education of Negro youth at both the elementary and secondary level.

On April 22, 1907, Anna T. Jeanes, created a deed of trust endowment. The funds would be applied solely towards the maintenance and assistance of rural, community and county schools for the Southern Negroes and to promote peace in the land and goodwill among men.

Fidelia Jewett was a philanthropist that made a donation of $2,500 to be used in the construction of a dormitory 87 years ago.

Robert B. Knott was born October 11, 1872, in Natchitoches Parish, Natchitoches, Louisiana. He was the son of George M. and Sophronis Jones Knott.

It was through the sincere and genuine efforts of Senator Knott that Grambling became a state supported institution. He accompanied Charles P. Adams to Shreveport, Louisiana in the year 1928, at which time a personal visit was made to Governor Huey P. Long. Governor Long finally considered the proposal after hearing the story of the long financial struggle of the institution. This visit cleared the way for subsequent meetings and the passing of necessary legislature acts which made the decision official.

LaFayette Franklin "Fate" Richmond (1864-1948) lived his entire life in the Grambling area. His parents were Alfred and Parthenia Richmond who were slaves owned by the Lewis family. He was educated through the efforts of the slave masters. After slavery ended, his family was freed and given land.

Mr. Richmond supported his family through farming and real estate sales. There were quite a few people moving into the community and there was a need for land to build homes.

It was LaFayette Richmond and a group of men in the area who organized the North Louisiana Colored Agricultural Relief Association. He was the President. They were interested in building an industrial school to educate the children in the area. Booker T. Washington responded to their request by sending Charles P. Adams.

Richmond advised Adams to move to a new location when conflict arose between Adams and the ministers who wanted their children to have a classical education. He was responsible for finding the new site and was one of six men who contributed $25.00 each to help with the purchase of the land. Mr. Adams had hoped that the two schools could be consolidated but the superintendent of schools advised them to concentrate on the new locations.

When the students from Grambling attempted to attend classes at the Allen Green Baptist Academy (its new name) they found doors were nailed shut and Richmond used his ax to open the doors. He also made it possible for Adams to use the Methodist church in which to hold classes until the new building could be completed. The new school opened in 1905, consisting of two frame buildings.

Fate Richmond served as a deputy sheriff for the Grambling area, being duly authorized by the Lincoln Parish Sheriff's Office. He was authorized to arrest and handcuff violators of the law. Mr. Adams often assisted him. They were a team that only death separated. They were known as "Law" and "Order."

Elizabeth D. Robinson, born of missionary parents in West Africa, was reared in Chicago where she attended public schools. She graduated from Tuskegee Institute in 1931 and was invited by the late Charles P. Adams to join the faculty of the then Louisiana Negro Norman School where she taught in the Elementary School Department until 1935. From 1935-1939, he served as County Supervisor in Montgomery County, Georgia. Ms. Robinson returned to Grambling College in 1939, with R.W.E. Jones and worked in various capacities until her retirement on July 1, 1971.

Elizabeth "Liz" Robinson devoted her life to the development of excellence in herself and others. In pursuit of improvement for herself, she earned the Master’s degree at the State University of Iowa and did additional study at the University of Colorado and New York University.

She served as Professor of Education, Head of the Department of Education and Director of Student Teaching. She has been credited with having had a dynamic impact on the invitation, development and implementation of many of the innovative ideas that made Teacher Education at Grambling State University an outstanding program.

Sojourner Truth, as she is popularly known, became famous in her lifetime as a preacher, abolitionist and lecturer. Born in 1797 in New York, she is known to have been freed from slavery by the New York Emancipation Act of 1827, and to have lived for a time in New York City. Soon disillusioned with life there, she adopted the name of "Sojourner Truth," a name she felt God had given her and assumed as her mission in life the task of traveling across the country and spreading "the truth." It was not long before this self-styled prophetess had become famous as an itinerant preacher. Wherever she appeared, huge crowds would gather to hear her, for she was reputed to have not only "mystical gifts" but great powers of oratory as well. She died in Michigan in 1883.

Harriet Tubman (1821-1931) was born in slavery in Bucktown, Dorchester County, Maryland to Ben and Harriet Green Ross. She was the greatest conductor in the Underground Railroad. She was uneducated and illiterate. She was called the "Moses of her people" during the Civil War. With rare courage, she led over three hundred Negroes up from slavery to freedom and rendered invaluable service as a nurse and spy.

Phyllis Wheatley (1753-1794) was brought to the United States as a slave and received her name from Mrs. Susannah Wheatley, the wife of the Boston tailor who bought Phyllis. She received her early education in the household of her master. Her interest in writing stemmed from her reading the Bible and the classics under the guidance of Wheatley's daughter, Mary. In 1770, her first poem was printed. She published "Liberty and Peace" shortly before her death. Her poetry is considered important today largely because of its historical role in the growth of American Negro literature.